what is the Diagnostic Colonoscopy?

Colonoscopy (KOH-luh-NOS-Koh-pee) is a test that can prevent colon cancer or find it early when it’s easier to treat and cure. Colonoscopies are done in an outpatient setting at a clinic or at a hospital. The test is done by a gastroenterologist or health care provider who has specialized training to find and remove polyps from the colon and check for signs of cancer. Polyps are growths in the colon that may turn into cancer. A colonoscopy is used during a colonoscopy. It is a thin, flexible tube that has a light, camera, and a tool to remove polyps or to collect cells for testing. 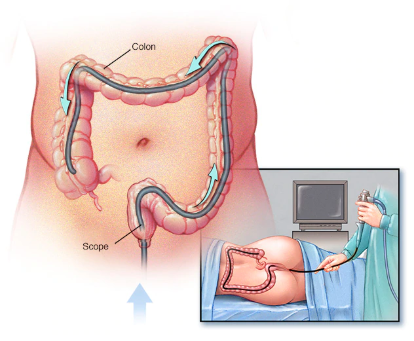 what is the Diagnostic Colonoscopy?

A colonoscopy is an examination of the entire colon (large intestine) using a long, thin, flexible tube (colonoscope) with a camera on the tip. The most common goal is an effort to prevent colon cancer. Without any screening colonoscopy, about one in twenty people will develop colon cancer.

what is the Diagnostic And Therapeutic Colonoscopy:

The colonoscopy is a visual exploration of the colon mucous (large intestine). Consists insertion of a flexible optic probe in the anus after adequate preparation. The Exploration usually lasts between 15 and 60 minutes.

with the patient lying down on their left side, a digital rectal examination is performed usually with an anesthetic cream. Afterward, the endoscope is inserted and is made to progress through the colon, sometimes even to the last section of the small intestine. With the insertion, you may notice spasms or abdominal pressure due to the necessary insufflations of air during the exploration o hen passing through the characteristic angles of the colon. It is a normal thing that quickly disappears. In determined circumstances and always under the recommendation of the specialist doctor it can be performed under deep sedation. If this is the case, you will remain in the hospital or some time until the effects of the medication administered disappear and you must not drive as your reflexes may be altered.

Purpose of the procedure and benefits:

Diagnose the diseases of the digestive segment explored and treat them if possible during the same exploration. This way, if polyps are found during the endoscopy they can be extirpated (polypectomy) with a noose that cuts around its base. If there is narrowing it can be dilated and even leave a prosthetic placed. If a bleeding lesion is found a treatment that ceases the bleeding can be applied.

To able to reach a diagnosis in most of the cases, either by a direct visual of the lesions or thanks to the microscopic study of small tissue samples (biopsy) taken without pain during the exploration. To know the benign or malignant nature of the found lesions.

It is possible to extirpate polyps during the same act and avoid an operation. Their recuperation of these after the exploration allows their microscopic study.

Due to the suspicion or evidence of bleeding the lesions that cause the hemorrhage can be identified and permit to be acted on, avoiding operations and transfusions. If there is narrowing you will not benefit from intervention as they can be widened by diverse methods, utilizing bougies or pneumatic balloons, placing prosthetics, etc.

Foreseeable consequences of its performance:

The correctly recommended colonoscopy will try in the majority of cases to assure a diagnosis that will be able to be treated better and better follow-ups. It is the only procedure able to diagnose colon cancer in an early stage which carries a more favorable prognosis.

Despite the proper choice of technique and its proper performance, undesirable side effects may arise such as pain due to abdominal distension, dizziness, hypertension, infection or arrhythmias. We must also mention the smaller risks that could be derived from the usage of laxatives or cleaning enemas previous to the exploration. (less than 1 of every 1,000 explorations). The hemorrhage or perforations are very infrequent When therapy is practiced during the exploration this slightly elevates the risk.